I was made very welcome at the Assembly of Methodist Women in Norway at Grünerløkka Methodist Church, Oslo, Norway the weekend of 21-23 April 2017. All my travel expenses were reimbursed by the Norway women’s treasurer. I was given accommodation in a single room in a hotel.

I had been invited to attend by Tove Tveit the current president/chair of their Board knowing that there would be discussion about the forthcoming 14th World Assembly in 2021. A few weeks earlier, I had joined a site visit with WMC steering committee and local arrangements committee (LAC) at Gothia Towers Hotel and Conference centre in Gothenburg, Sweden. There I had been joined by World Secretary Mataiva Robertson, Walla Carlsson from Sweden and  Kari Skinningsrud from Norway. We all agreed the Gothia Towers would make an excellent venue for our next World Assembly. 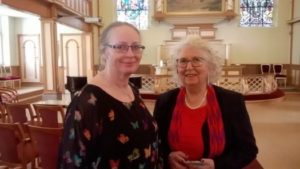 Maria Lofgren and May Akerstrom

Two women from Sweden joined us in Oslo: Maria Lofgren and May Akerstrom. Both confirmed that the women of Sweden are willing to form the LAC for the World Assembly with the help of the women of Norway, who agreed to this arrangement. Walla Carlsson, unable to attend because of a prior commitment, sent her greetings. Alice Cooper was also present but in an unofficial capacity. Pille Magila, from Estonia, (pictured below with Alison) attended as the women of Norway are in special relationship with the women of Estonia. 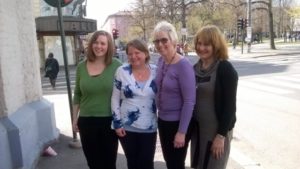 On the Saturday morning we began with opening worship and Helene Granum (HKMS) who is training for presbyteral ministry, reflected on the Easter story of the women going to the tomb. She reminded us to bring what we have to Jesus. Alida Markaskard (Missions secretary) provided red heart- shaped leaves for us to write names of women who had died in the last year. The leaves were then hung from a tree reminiscent of the memorial service at Houston.  Jorun Thurmann, (Secretary) sang most beautifully including one song written by popular Swedish  singer  Lina Sandel on the death of her sister:  ‘Blott en Dag’ (only one day at a  time). Although I could not understand any of the words of this song, it brought me to tears.

Tove Tveit gave her report as chair of the Board, highlighting the need to address reduction in membership, work among migrant women, representation at Methodist Conference, and the need to keep costs of events down so as to enable wider participation. They are working on their identity as Methodist women and using MDGs as the basis for their action plan. A weekend in April 2016 focussed on Empowerment of women. They have improved use of social media (having an official photographer present for their meeting). They continue to support Thursdays in Black and enjoy links with Estonia and Ukraine. They were represented at Pomezia and Houston events. 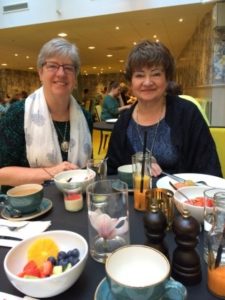 After a break for coffee the budget was presented and then followed a discussion about a change of name for the group. Agreed: Metodistkirkens kvinner (Methodist Church Women) 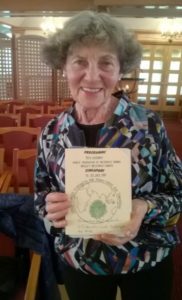 Alice Danielsen introduced herself to me as someone who had attended the Singapore assembly as a delegate and remembered Edith Loane, Elisabeth Kissak, and Margaret Nicholas. She also mentioned Inger Borgen. Alice had been involved in WMC in Oslo when there was no Methodist women’s organisation in Norway. The German women encouraged them to get involved in WFMUCW.

Maria said Swedish women will take the main responsibility of the local arrangements committee (LAC) and hoped Norway would support them. Tove encouraged the Swedish women to tell Norway how to help them and they would willingly respond.

Elections to the board: 6 members were elected (or re-elected), including Helene Granum, the current Helen Kim Memorial Scholar. The other two nominated will be reserves. The Board will decide who will be the leader. 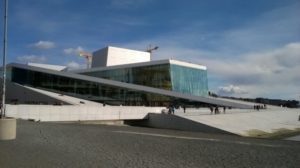 I was presented with a gift, an angel made of broken glass by prison inmates.

A raffle was organised to raise funds, using lolly sticks with numbers on, and donated gifts as prizes.

On Saturday afternoon we had free time to see some of Oslo, including the impressive Opera House.

In the evening, Helene gave an illustrated talk on the HKMS program. 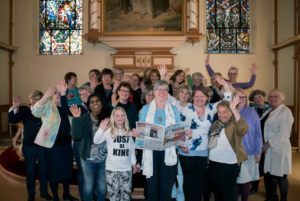 Karl Anders Ellingsen, the official photographer, took one of all of us with me ‘reading’ the Methodist Recorder.

In the Sunday worship, Hilde, a minister now in Halden, spoke on John 20:11ff

‘I carry my sadness, my spices, my ointment, to the tomb.  I remember the sounds I heard when Jesus was on the cross. I come to the tomb. I carry the joy and the peace and the wonderful message he has asked me to bring to the world.’

The choir, which included Helene Granum, sang in worship. They are very talented, with an excellent musician and have produced cds. They apparently sang at the United Methodist General Conference in Portland, May 2016. They would love to come to Gothenburg in 2021 for the World Assembly.

I left Oslo feeling very blessed by the whole weekend spent with these lovely and committed Methodist women.